Pressure has always been a mystery to me. I have read everything about case measurements and reading pressures from fired cases. Always a concern, and it seems we as hand loaders are still in the dark on some of the mysterious happenings inside our chambers! I know I was, and still am to some extent.

A few years ago, even before the B&M were thought of, I found a system called the Pressure Trace, by RSI. Recreational Software, Inc.

I had been using the RSI shooting software for a couple of years, one of the few software companies that have shooting software for "apples"! Yep, I am a "Apple" guy! I started looking at the Pressure Trace System they offered, price was reasonable, so I decided to give it a go. Of course, I had to work from a Windows System, unfortunately, so that made it a little unfriendly to a Apple guy, but I seemed to manage my way around it. After some trial and tribulation I was reading pressures or pressure estimates on some of my favorite loads that I had used for years in 358 STA, 458 Winchester, 458 Lott, 45/70 and others. It was fun. But I was taking it far too seriously and trusted the system far too much to begin with. I was having secondary peaks that were crazy, 100'000 PSI and nonsense, while primary peaks would be where they were supposed to be. Being somewhat "Compulsive Obsessive" about some things this was driving me insane. Had several very very long conversations with Jim Ristow, of RSI about the secondary peaks, and still I was not so sure about this phenomena. Did not matter, factory ammo, my hand loads, everything was giving me readings I did not agree with, and that the case measurements did not indicate, nor any other normal pressure signs.

After much consideration I, on a fluke decided to scrape off the strain gage and replace it with a new one. I took all the measurements needed to set up the barrel perfectly, took a lot of time with this one, made 100% sure everything was set up right, everything was working proper. Shazam!!! Secondary peaks disappeared, strange happens disappeared, anything out of order disappeared! I had not done a good job setting up the strain gages the first go around, so I was getting wild readings, can anyone here say and remember "Operator Error"? That was me, Operator Error!

On any of the other rifles I was doing test work on that was giving strange readings, I took a pocket knife, scraped those strain gages off, and replaced them all. Yes the strain gage can be removed from any rifle with a little acetone or similar product without using a pocket knife and scratching up your rifle, but I needed to expedite, I did not have time for such "niceties". All my Pressure Trace work started to look proper and fell in line with what I was seeing from case measurements and other indicators of pressure. This was actually working, and as best I could determine it had to be pretty close to real numbers in PSI. Exact? Well, probably not, but what system really is? I would venture to say that with an individual rifle that it is coming in very close, and close enough that you should pay attention to what it tells you!

At the end of 2005 I started working with the B&M series of cartridges. Honestly, I was a bit lazy about working with the Pressure Trace, decided I would just do case measurements and study other pressure indicators to develop the cartridges. I did this on the 50 B&M, 50 B&M Super Short, 458 B&M and the 416 B&M from the start. That in itself was a learning experience as the B&Ms work from RUM brass, no big belted case to work with? I had to learn a new system of case measurement, and even had to create it myself as I went along. On the bigger bores I first decided that a .0015 increase in case size from unfired to fired was about right. Then I had some go to .002, but everything looked very good, no possible signs of pressures. Then to .0025 increase, then anything that went much above that was beginning to show other indicators, never had a stuck case, or even a sticky bolt. Smooth was the word, so I stopped at .0025 increase, this is with fired cases too, not new cases. New cases would always go over the allowed amount.

Well Aaron Carter wanted to do an article on the 458 B&M. Aaron is a young fellow and maybe back then a little green around the gills, but a fine young man none the less. Aaron had some concerns about pressure, even a long conversation we had I was not able to convince him the 458 B&M was actually safe with the loads I was shooting. Of course take a look at the 18 inch 458 B&M and folks do wonder how you can get performance like that out of such a tiny gun.

OK, I agreed to get off my duff and start doing some pressure traces with the B&Ms. I got all the strain gages attached, took all the right measurements, took my time to get things set up exactly right. And wow was I apprehensive about squeezing those first rounds off! What if I was all wrong? All the work I had done, what would I do if it was all over pressure?

Well the story turns out excellent. I started shooting and testing, which took several weeks to accomplish. And it appears that I was spot on the money across the board with the various B&M Cartridges. The Pressure Trace worked perfectly, gages were perfect, no wild strange second peaks or other readings, pressures were falling into place and most all well under what I had thought they might be. I was in great shape, even able to increase velocity of some loads, in a safe manner.

Aaron was happy with the findings on the 458 B&M, and did the article and considered himself safe by doing so.

I was able to prove to myself at least that what I had done was correct, I had figured out the mysterious case measurement study, at least for the B&M cartridges at that time. And found the Pressure Trace to be an immensely valuable tool for working with these cartridges, which are a great unknown.

All of the pressure readings listed with all the B&M cartridges come from the Pressure Trace System. I can't tell you whether they are 100% exactly perfect or not. I can tell you that I trust the system, and from everything I can compare with it matches up with reality as best I can determine. After a year or so of being lazy with it again, I am back to work with it and it has told me some truly amazing things in just the last couple of weeks.

I found the Pressure Trace System one hell of a good tool that any Hand Loader can add to his tool pouch. I will continue to do test work and load data on all the B&M Cartridges as we move forward. I have attached a strain gage to the 9.3 B&M, so that data should start rolling in over the next week or two. 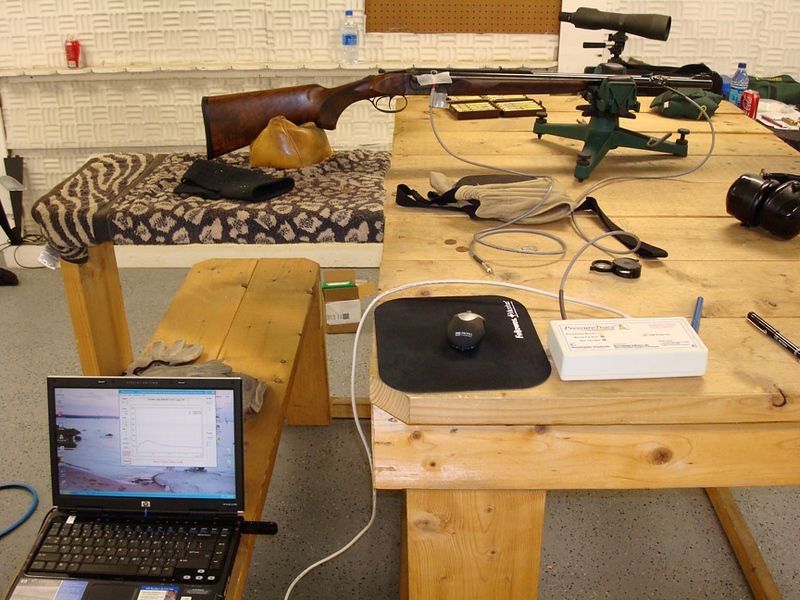 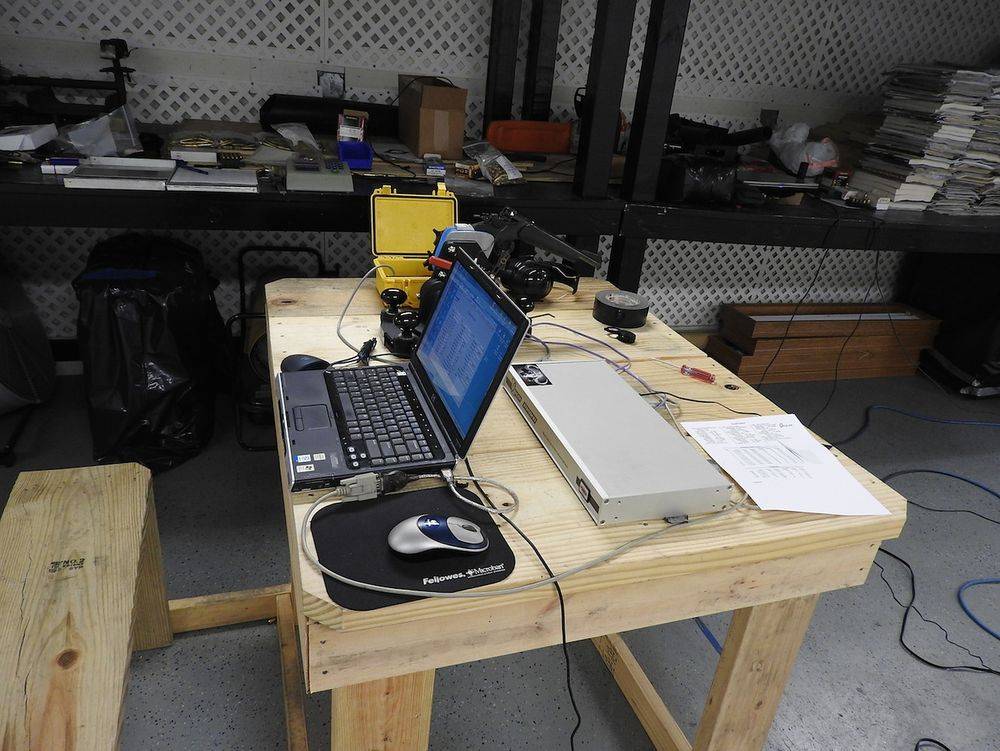 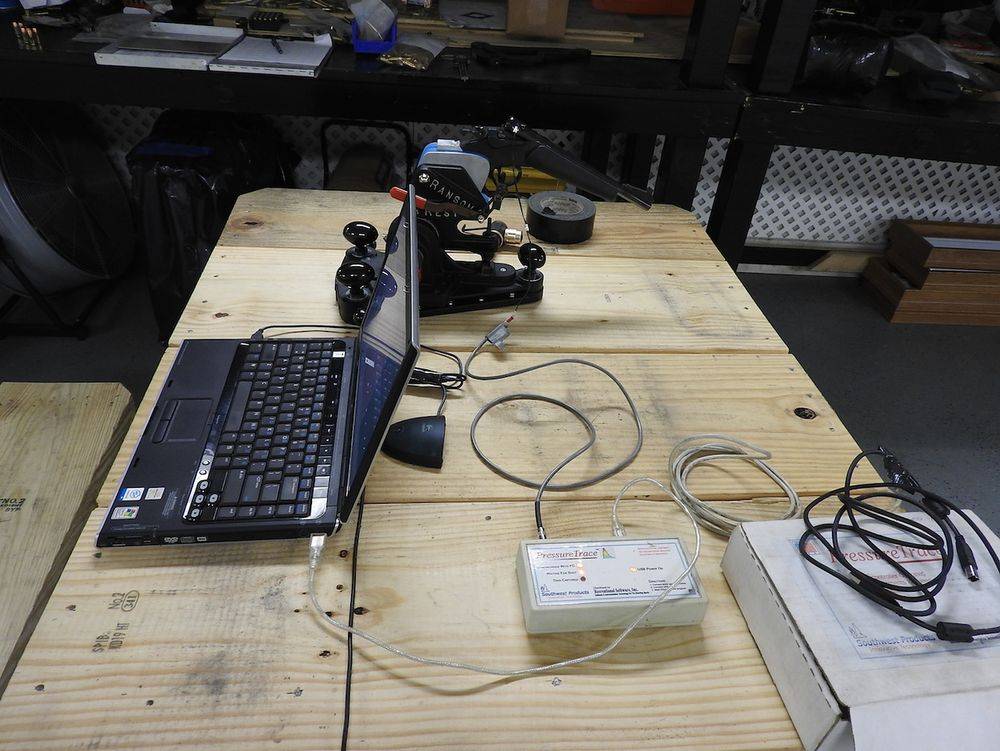 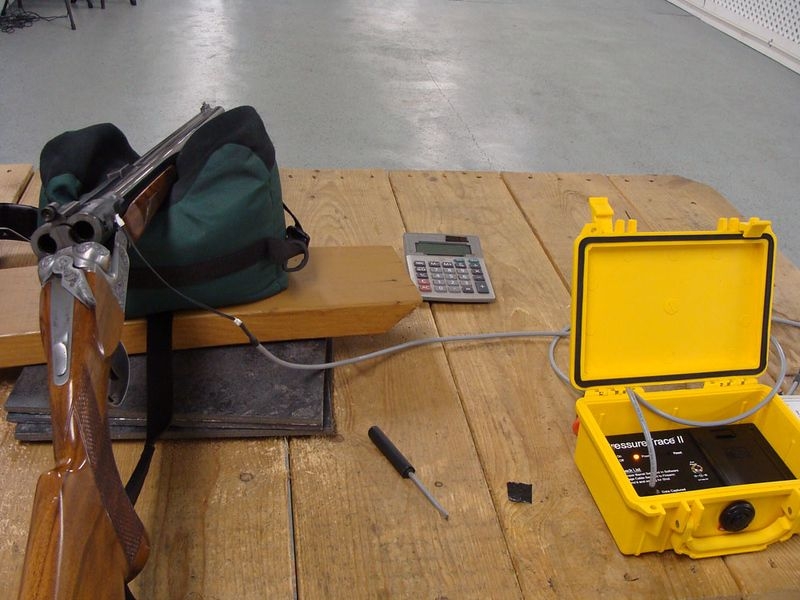 The above photos show you different systems, 1 and 2 show the RSI Pressure Trace 1 and photo 4 shows the Pressure Trace II.   There is a great difference between the two.   The Pressure Trace 1, we learned is an absolute Stand Alone, what you see is what you get system, on par with the Industry Standard Oehler, but at a mere fraction of the cost.    Pressure Trace 1 has been discontinued, simply because the internal technology died with the designer and all that was lost.   This lead to the development of the Pressure Trace II system by the same manufacturer, but the PT II has to be calibrated to be correct, not a stand alone system.

I was lucky to have my Original PT 1 completely repaired with the last of the new parts available.  I became very reluctant to use it on a steady basis, since it absolutely could not be replaced.   At some point later, Sam found one for sale, and bought it, we now have two PT 1's on standby.   We like PT II, if calibrated to a known pressure or gun.   It works great, and once calibrated uses the same outstanding software that PT 1 uses.   And once calibrated, it is just as accurate with that gun from that point forward.

I like doing pressure work, and was able to justify the cost and investment in the Oehler System 83 some years ago.   This too is a Stand Alone system, what you see is what you get.  Like PT 1.  The Oehler also confirmed just how good the PT 1 system is, or was.   All data done with the Oehler, matched up with all the prior work done with the PT 1 system, we were very pleased with that.  Today, I use mostly the Oehler, unless I need the better software of the PT systems to look at curves.......... 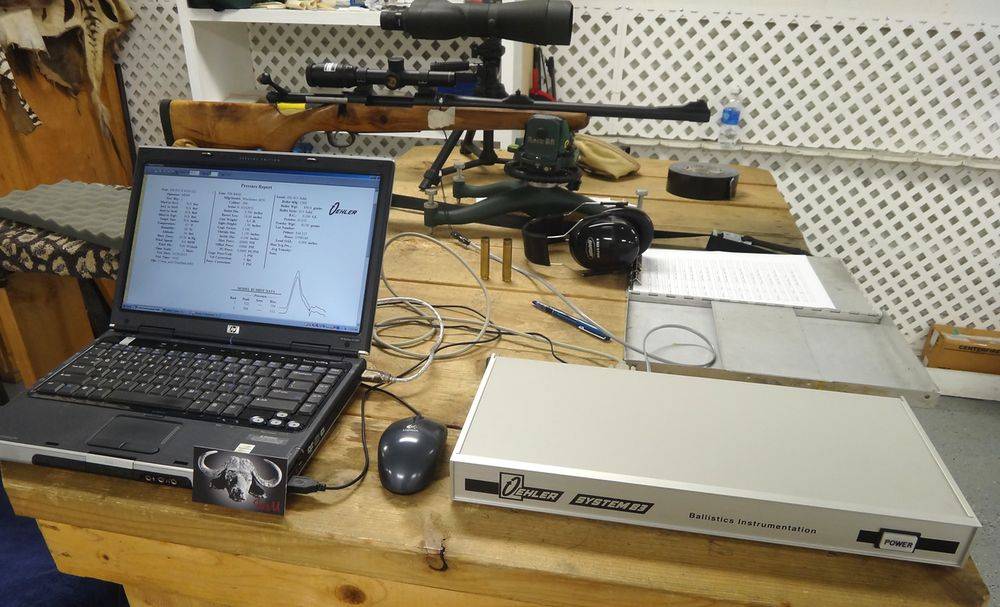 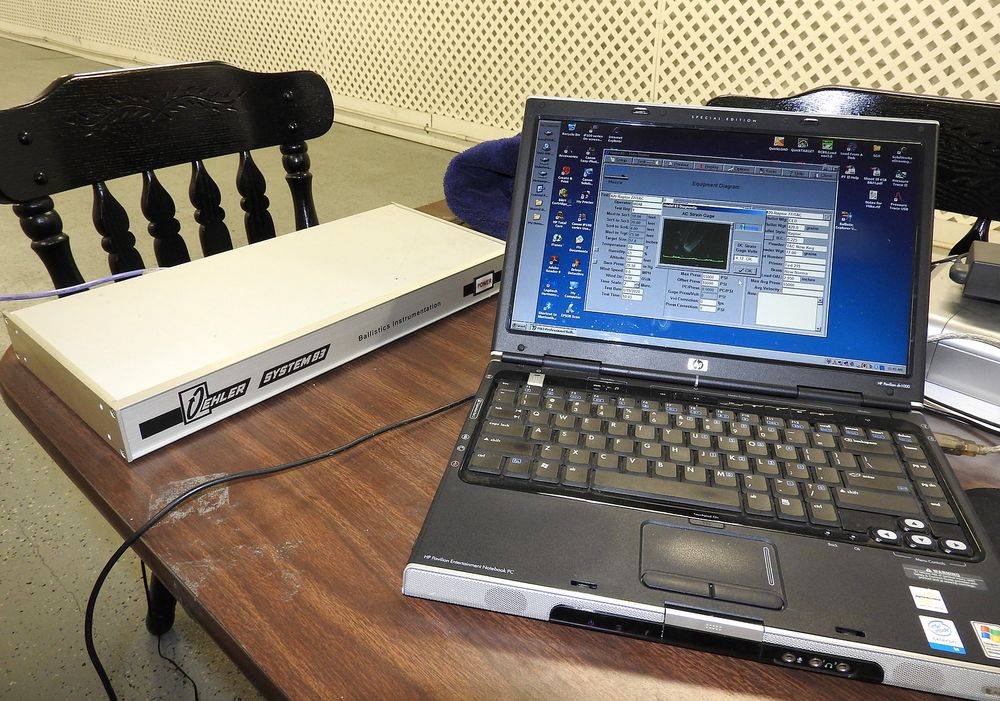 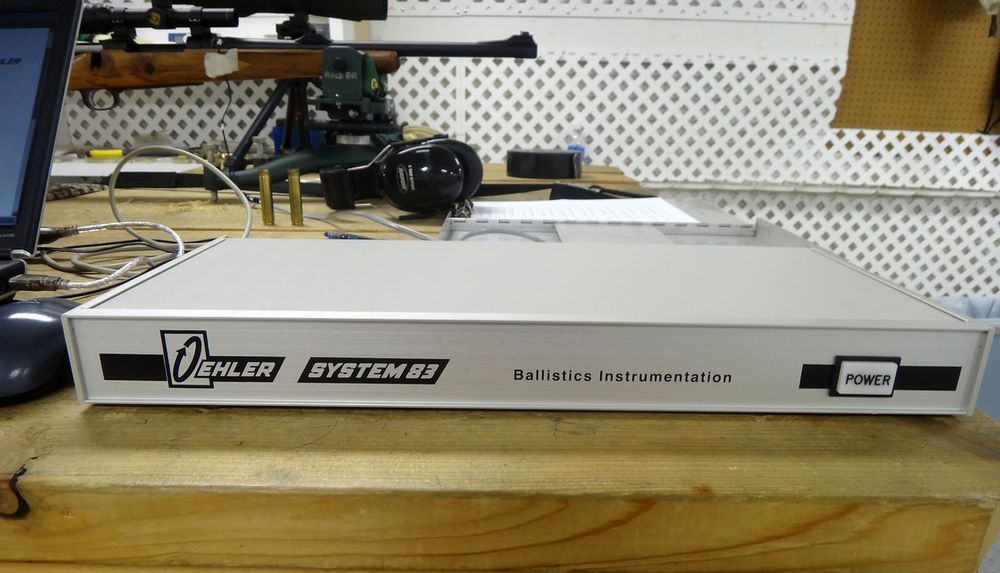