So far this month we have still been busy with testing the new ESP Raptors from Cutting Edge. This looks like a bit slower process than first anticipated. More to do with stability, and tweaking the various smaller calibers than anything else. Getting there, but not quite yet completed.

We managed to get a barrel strain test done early in the month in .458 caliber, and complete Load Data for the 475 B&M, before sending the entire Pressure Trace systems, computer and all, back to RSI. PT II was just not compatible with my operating system as it is, so RSI is getting the computer up to speed and working with PT II and PT 1 is getting maintenance while it is there, and any upgrades it might require. We should be back in the Pressure Trace business in a couple of weeks.

I have been getting a few requests to upgrade my out dated 458 Winchester and 458 Lott data with the Cutting Edge BBW#13s. Since the B&M cartridges and rifles, these and most all other cartridges and rifles have been retired, I have no further use of them other than test rifles for various things. So my load data was old, and out dated. I got busy and worked a few loads for some of the guys, some of my AR friends and whoever might need it this month. Pay attention to the Warnings, the Cautions, and the Special Notes provided with the Document. Just download the pdf document below.

In other events we are looking at a series of new scopes for the B&Ms. I really like some of the Nikons I have been working with. Hopefully we will see if they hold up and report back some good news about them later on.

Accurate Innovations is now going to be able to make stocks for the various Winchester M70 WSSM actions. Of course, our big interest is a really classy Wood Stock, for the B&M Super Shorts! I have already sent Wes a 50 B&M Super Short to have the first AI Stock done. This is going to be a very nice addition, and enhance the Super Shorts, while adding versatility. Not to mention, Drop Dead Gorgeous!

Wow, December, Again? How fast! Looking forward greatly to the holidays of course, and the break it brings. Shortly after Christmas we are lucky to be host to Paul and Diedre Truccolo from Australia for a few days! We are very much looking forward to their visit. Right after that, January 2, Andrew will be arriving from South Africa, and on the 4th we are all packing up for Dallas Safari Club Convention 5-8th. We will be doing a lot of visiting with our AR friends in Dallas, and everyone is really looking forward to that, with me at the top of the list! After we all return home then our friend Daryl Lenkic will be arriving on the 9th from Australia for a visit and I suppose Daryl, Andrew, and myself will be doing some serious big bore shooting during his visit as well! It's going to be a busy few weeks here, and we are looking forward to every minute of it!

Thus far we have been busy this month. In addition to working with and testing the various new ESP Raptors, mostly in smaller calibers, we have been extremely busy with the new 475 B&M Load Data. I have it posted now as of 11/21/2011 on the 475 B&M page for all those interested.

Other news, I have been in contact, and have contracted with Dieter Horneber to make a large run of 9.3 B&M head stamped brass, and of course 475 B&M head stamped brass. Dieter informs me it should be ready in January, if I predict Dieter, I would say more like March! I have specified that the brass be capable of over 65000 PSI. 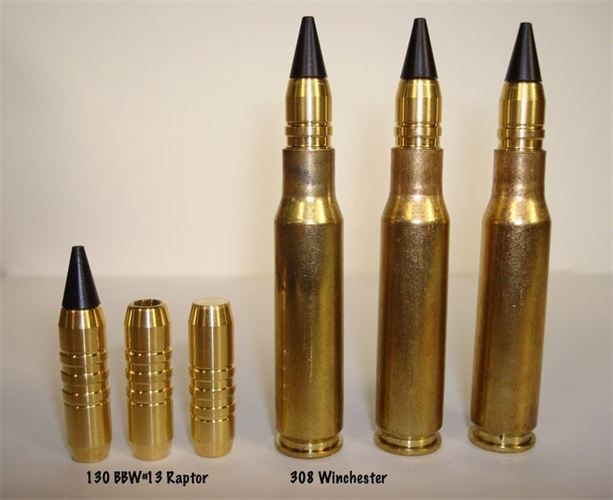 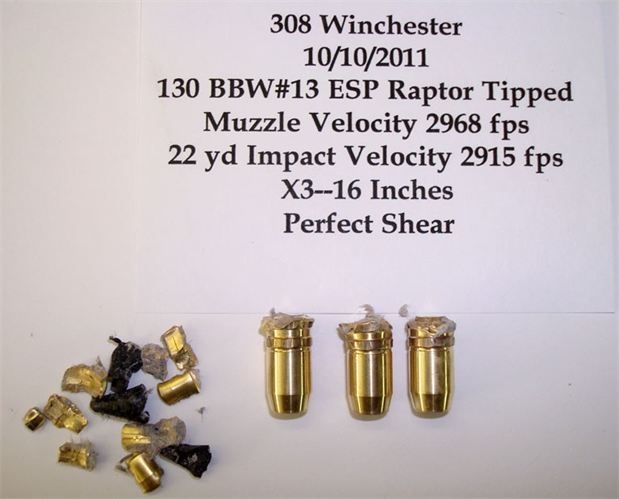 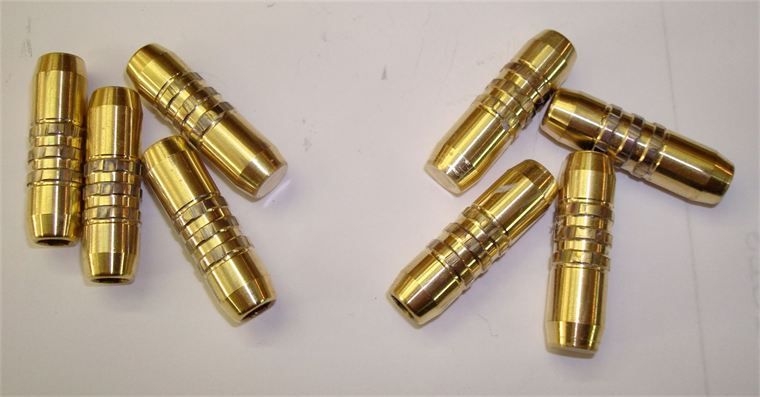 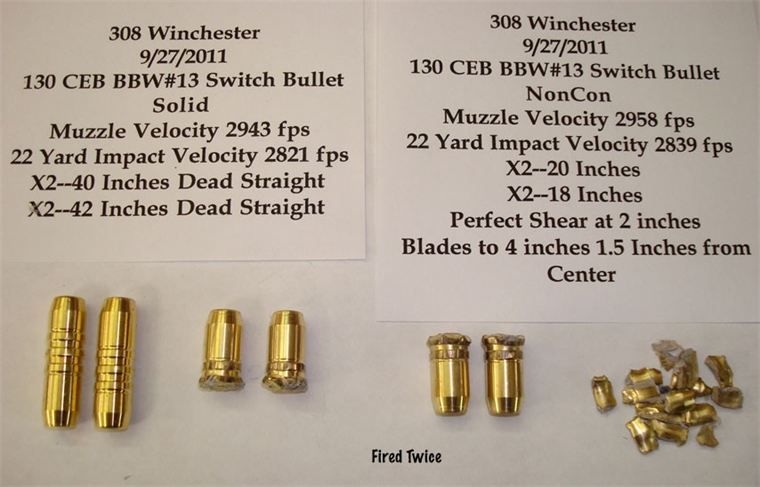 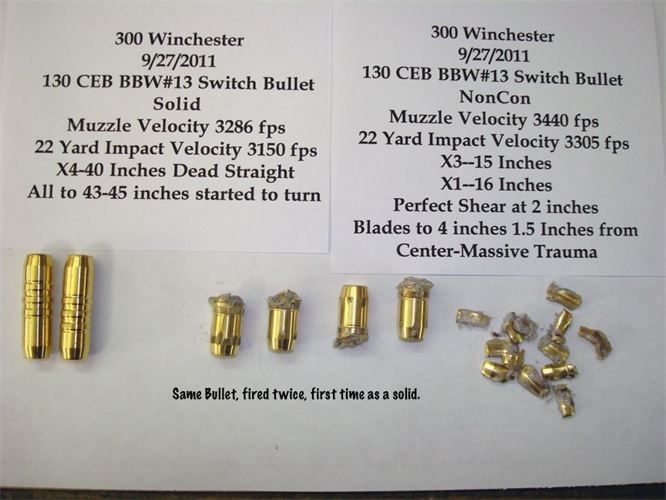 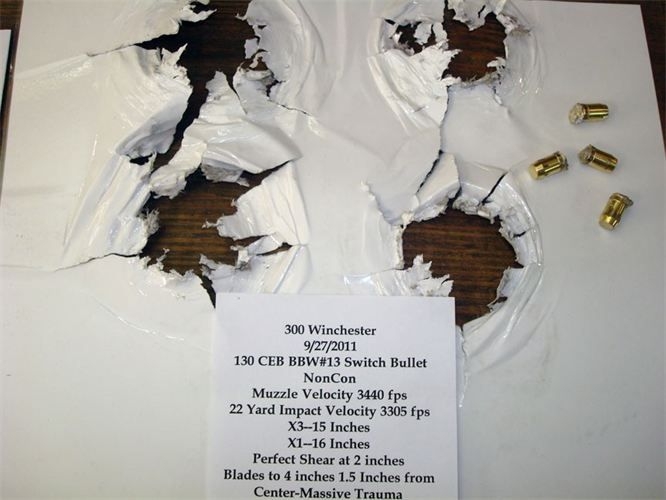 The ESP Raptor will be made in all major calibers from .224 to .375 first, and then later for the Big Bore rifles! They will be available from Cutting Edge Bullets in boxes of 50 and be supplied with 25 tips per box, from .224 to .375 caliber.

We have just returned from Zimbabwe and South Africa doing work with the 500 MDM and the 458 B&M. We were testing many of the new bullets from North Fork and Cutting Edge Bullets. It was a grand success, there were no failures of any sort with the rifles, cartridges, or bullets. Taken were elephant, hippo, buffalo and croc.

Still waiting on the following dies from Hornady.

We have been working on all sorts of projects since January this year, some double rifle work with the CEB BBW #13s, terminal performance with both NonCons and Solids, and we have continued our load data and pressure traces for the various B&M cartridges. One in particular that we have been working on is the 50 B&M Alaskan. I have been very slow with getting load data completed with it, however with some articles coming soon from Layne Simpson on the 50 B&M Alaskan and the fact that Layne liked it well enough to have a rifle built, I was compelled to get off my duff, get busy, and do some serious work with the cartridge. New load data is available on the 50 B&M AK page! With Layne's assistance we were able to identify some loads with powders that have made the cartridge excel.

I had a recent visit with JD Jones. JD was in the area, and made time enough to be able to drop by for a visit, along with his wife Jane. It was a great pleasure for me to spend some time with both of them. Of course JD and I managed to sneak away from the girls and do some serious work in the "Lab" so to speak. We spent quite a bit of time looking at a lot of SSK Industries work, here shows one of my 458 B&M rifles. I had a great time, and look very much forward to JD being able to make another visit soon!

We attended the Dallas Safari Club Convention the first of the month, and I must say we had a tremendously great time there. We talked with old friends, made many new friends, and in addition was able to meet many of our Accurate Reloading Pals while there. We spent a good deal of time with the boys from North Fork Technologies, of course talking bullets the entire time. This show is a "Must Attend Event". We will be in attendance each year from here out.

We are still working with bullets, both to enhance the B&M Cartridges, and putting in stock other calibers and other designs from both North Fork Technologies and Cutting Edge Bullets to be available for anyone who is in need of them. Of course as always these will be and are available direct from both North Fork and CEB also. I try to give our B&M guys a break on the bullets, as well as our Accurate Reloading pals! While retail prices are listed, there is always a better price on them if possible.

In other recent news there is disturbing news from Barnes Bullets. Seems they are discontinuing their line of "Flat Nose" Banded Solids in favor of the "Old" Round Nose profile. Their reason, feeding issues in "CHEAP" factory production rifles! This of course is a disgrace to "Dangerous Game" performance in real Dangerous Game rifles. We as shooters need not worry, anything that Barnes has to offer can very easily be replaced by the Super Performance solids from North Fork Technologies and Cutting Edge Bullets. Obviously we here at B&M wholeheartedly DO NOT support Barnes decision on this matter, and in fact view it as a traitorous act to bullet performance, and our performance and success in the field. As far as I am concerned Barnes has sold out on performance to sell more bullets for cheap rifles. I can most certainly replace anything that Barnes has to offer in favor of bullets capable of superior performance in the field.

Bullets have remained the main focus on our work through December. Still working with Cutting Edge Bullets we have made some changes to the B&M bullets. The wide spaced 4 band Solids we have moved 3 of those bands to the top and left 1 band at the bottom. This gave us more neck tension, and allowed us to seat the bullet in different positions, should we desire to. This is now standard and finalized on 416, 458, and 500 calibers. Right now most of these bullets have been designed for the 500 MDM, 50 B&M, 458 B&M and the 416 B&M, all in brass, all with both solid and NonCon HP. 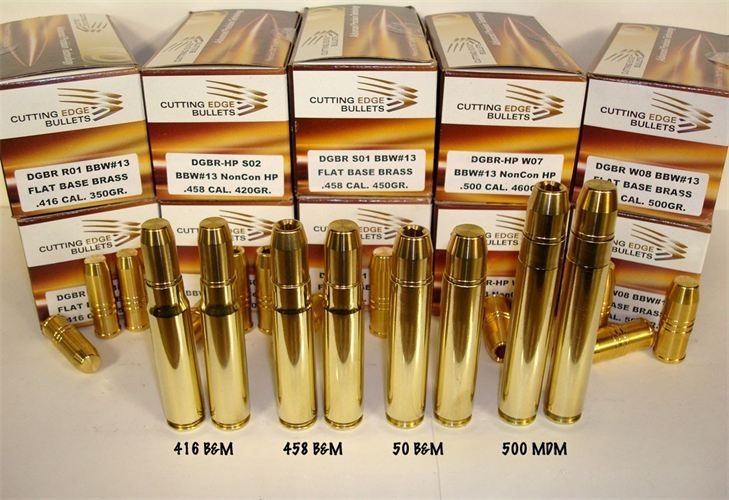 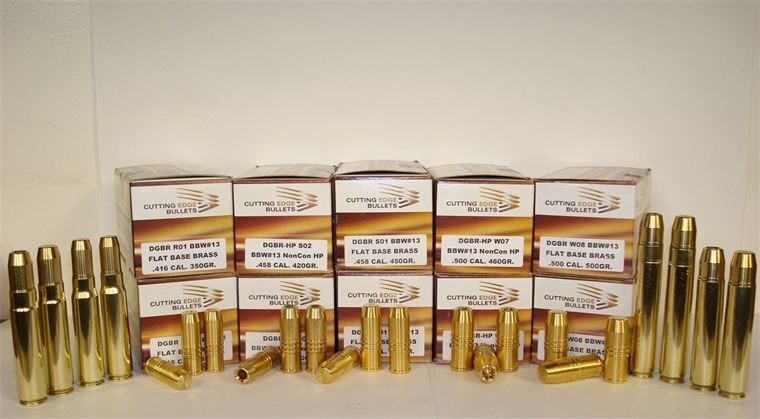 Our next step in the process will be to have these type bullets available for all the Super Short Series as well.

Between Cutting Edge Bullets and the North Fork bullets, the entire series of B&M cartridges has been enhanced greatly. After all, one must have a proper bullet!

New dies have started coming in from Hornady.

North Fork .500 caliber 450 gr and 375 gr CPS bullets are now in production and available from North Fork. Designed specifically for the 50 B&M and the 50 B&M Super Short. I received my CPS yesterday. A new version of the 450 and 375 FPS has been approved with a 68% meplat to facilitate feed and function in the bolt guns, without compromising stability during terminal penetration. They will be available within a couple of weeks. 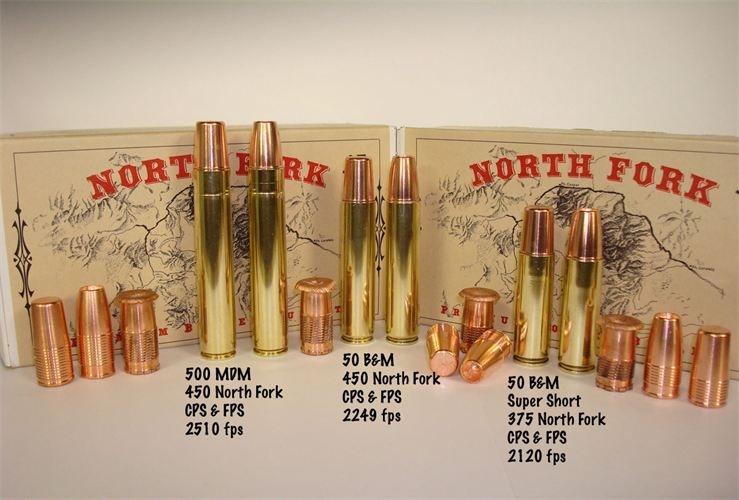 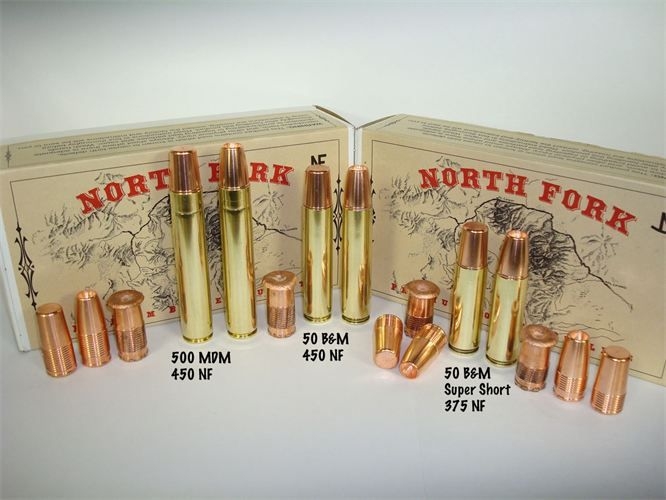 An Accurate Reloading pal, BoomStick, put on a Big Bore Shoot recently and some B&M rifles were in attendance. I think the guys had a "blast" you might say!BoomSticks Big Bore Shoot 6/26/2010

Back around the first of May 2010 a good AR friend Dennis Wright out in Eugene Oregon put a 50 B&M Super Short and a 416 B&M through their paces. A week or so later Jim (Capoward), long time friend from AR joined Dennis in his efforts. Some news about that below!DWright and Capoward 416 B&M and 50 B&M Super Short

General Comments about the Cartridges and Rifles

Other Rifles By SSK Industries

About the B&M Team