Cape buffalo can challenge most any cartridge, bullet, and rifle. It is very difficult to impress buffalo. To me, buffalo is the ultimate test for any rifle, cartridge, and most certainly bullet. I planned to ask a lot of the 50 B&M Alaskan, and did.

It came time to choose which of my 50 B&M Alaskans to take, and to work with. I have always been very partial to the big M71s, and I had the perfect rifle to take on this mission, the second Hi Grade M71 that I had converted a few years ago. This rifle is drop dead gorgeous, and was sent to Layne to be featured in one of his 50 B&M Alaskan articles.

I struggled for several weeks as to what sights to use for the hunt. Since a normal scope cannot be mounted properly on a M71 because it is top eject, this limited me to a forward mount Scout Scope, as in the photo above, or a Red Dot type sight mounted forward. Advantages and disadvantages to both systems, but for Dangerous Game, the Scout Scopes and extended eye relief scopes come up short on field of view at close range. This was a deciding factor for me, and might have proven to be the wrong decision in the end. I chose a UltraDot system, with a large circle and dot in the center. No magnification, and could use this at very close range without field of view problems.

As for bullets, since I was hunting Buffalo, I needed bullets I could depend on to give not just enough penetration, but more than enough penetration. I had tested the 365 gr Cutting Edge Lever Raptor quite a bit, and this "NonCon" gave ample penetration for buffalo. But on the safe side I chose it's matching 405 BBW#13 Lever Solid as a backup, and second shots. In the M71 I could get just a tad more velocity than in most of the Marlins, and ran the 365 Lever Raptor at 2175 fps, and the matching 405 Solid at 2120 fps. POI for the 365 was 1.5 inches high at 50 yards, and the 405 Solid dead center at 50 yards.

The first part of the Safari actually took place in South Africa. Naturally I was once again hunting with close friend and PH Andrew Schoeman, and most of this hunt was to work with the new 250 gr Cutting Edge Bullets in 458 B&M for plains game. It was here that I quickly learned that my UltraDot system was useless to me in thick brush,

I just could not see obstacles such as sticks in the line of fire! In totally open ground, and close range, the sight system worked great. It also held POI (point of impact) extremely well, and in all the travel and banging around never once lost POI. However, in brush it did seem to be a problem for me. Hence, I did very little work with plains game, with the exception of a couple of really good warthogs.

Our first day on the ground in Zimbabwe, hunting Gache Gache again with Corris Fierra and Andrew, buffalo hunting took a back seat. We had come across a small pod of hippos, out of the water, but taking a nap right at the edge of the water. I loaded the rifle with straight 405 #13 Solids, and Andrew and I were able to get to less than 15 yards from them.

There was a big body bull, right at the edge of the water. One of the other hippos busted us and all hell broke loose then........ I decided to hit the big hippo soon as he stood up and hammered him threw the right front shoulder, and then proceeded to pour it to him. He of course had a head of steam up headed to the water. I think my second shot hit mid section, third angled to the front from top of the back, along with a 4th in the same area. He made it to the water, but only 15 yds from the edge before going down. In an hour he popped up, right where he went down, and we recovered without issue. 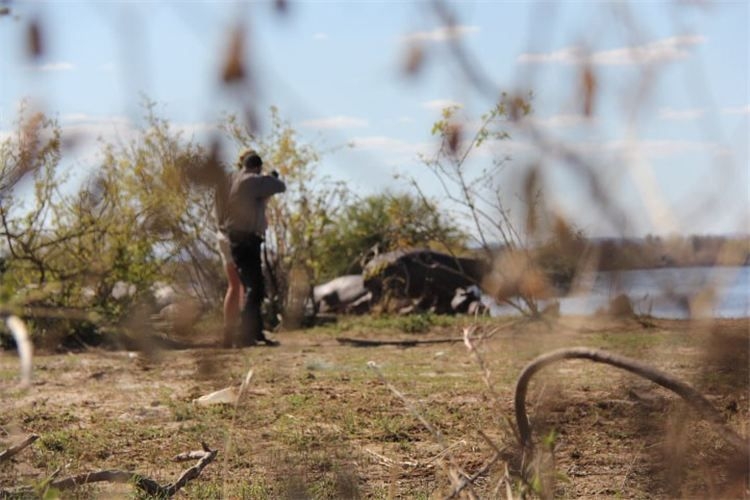 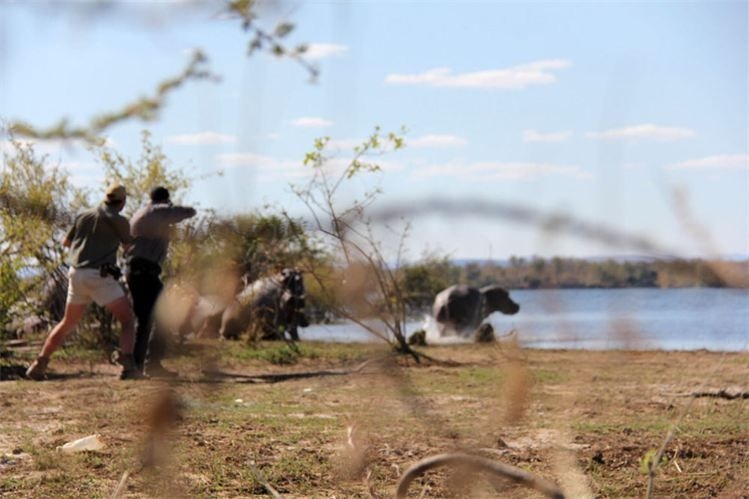 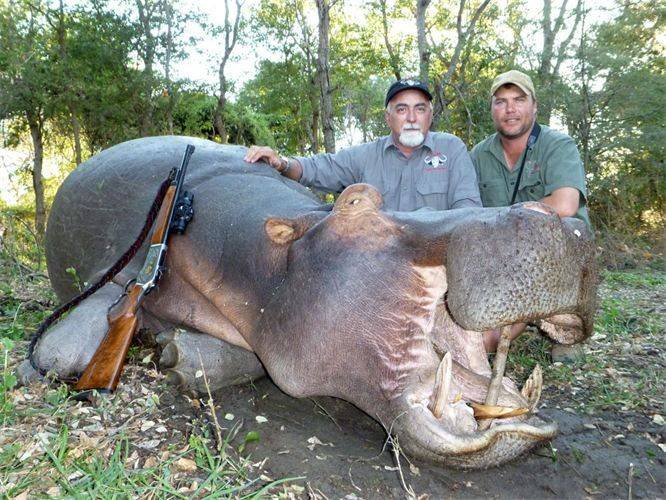 The 50 B&M Alaskan and the 405 CEB Lever Solids did an excellent job on the hippo. Penetration was averaging 5 feet, 3 of the bullets fired were recovered.

The very next morning after the hippo, the M71 50 B&M Alaskan got it's chance at buffalo! We ran across a herd, and bringing up the rear was a good bull. I was set up on the sticks, when they started to run across in front of me, bull bringing up the rear.

He was running at a fair clip, and I am an awful running shot, and normally would not take such a shot, but it was open ground for a way, he was close, 30 yards, I was on his shoulder and felt good, so I let fly with a 365 NonCon Lever Raptor at 2175 fps. The bullet took him through both lungs, just behind the shoulder, and I could tell he was hit good, although he continued to go all out, I was swinging with him for the second shot, a 405 #13 Solid at 2120 fps and let it fly even though he was behind some trees and brush. What I did not know at the moment the 405 left the barrel, I dead centered a 5-6 inch diameter tree..... It was only that afternoon when we reviewed the video that Andrew noticed the bullet hit the tree, then hit the buffalo, and even exited the buffalo. Two days later I requested we return to the scene and investigate... We did, found the tree without question, it was 10 yds in front of my position, the buffalo was exactly 30 steps behind the tree. The 405 drilled the tree, hit the buffalo mid section, and continued on to EXIT the buffalo as well.... Pretty spiffy performance I would say!

Within 10 yards of the second shot, he slowed up, the herd left him behind, and he angled his way behind some thick brush, stopped and waited on us! He was only 20 yards away, but all I could see was his head, and there was no shot. Andrew and I watched him it seems a long time, and finally he walked about another 20 yards out of immediate sight, and lay down in some even thicker brush. As Andrew and I moved forward Andrew spotted him laying there, with his head to us. Again, brush was so thick, and I am burdened with the UltraDot, I could not see head from ass, and in fact had to ask Andrew which way the head was!!!!! At that moment, I was not happy with the UltraDot, I felt like if I had a proper scope, I could at least maybe work one of the solids through the brush and put an end to this before it got ugly.

We watched him for at least 10 minutes, he would close his eyes, and I knew he was leaking down seriously at this point, but at the slightest movement he was wide awake! This could turn ugly quickly. Since I had no position on him at all, we backed up a couple of steps, and went around a large clump of bushes out of sight, at this point he was able to stand up to face us, but did not run away. Corris, which was about 15-20 yards behind, alerted us that he was on his feet.......

Andrew and I slipped around the bush, I could see him clearly at this point, put the dot on his shoulder and went to work. I hammered him 4 times with 405 Solids, which each shot pushing him back a step, until shot number 4 set him on his backside and he fell over with his back to me. I had five 405 solids loaded to begin with, now down to one, I loaded up a couple and made our approach quickly, but with caution. He could not get up, and he was still breathing although much labored, but I could tell he was finished. When I was within touching distance he made one last grasp at life, rolled completely over to face me and expired then and there. 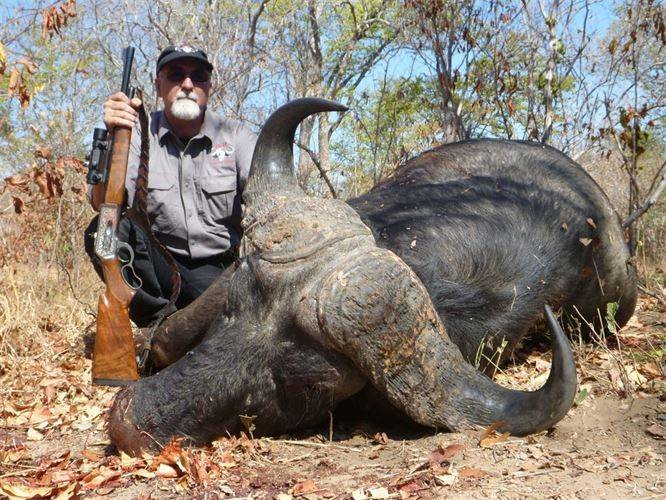 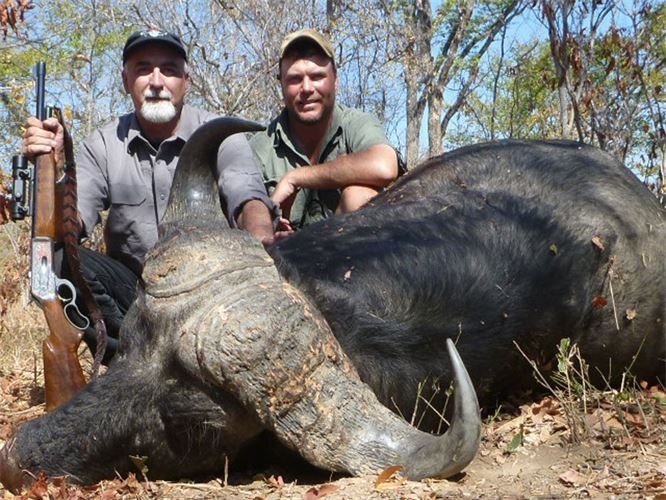 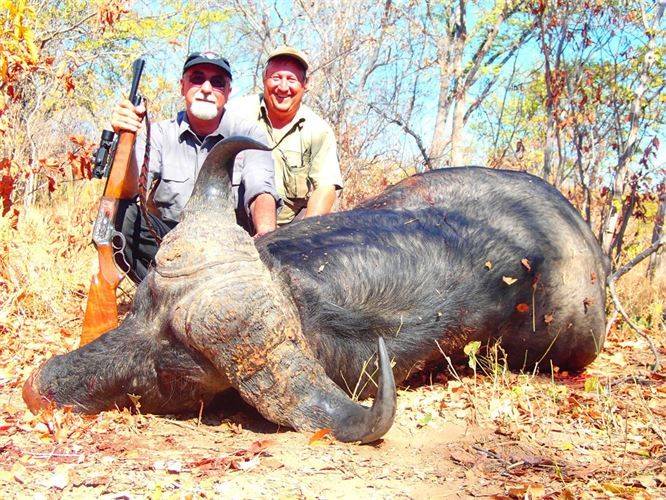 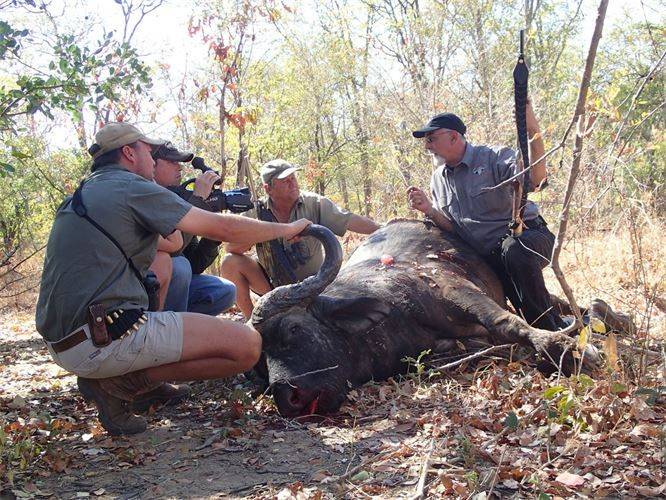 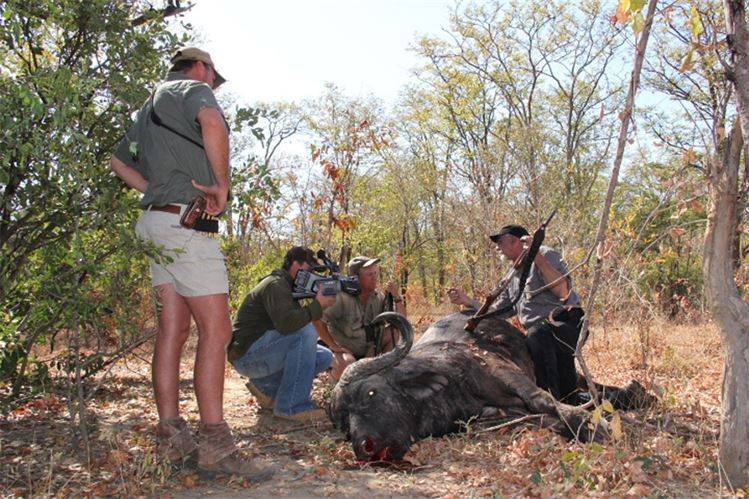 I believe that with these bullets, and perhaps some others we have designed for the 50 B&M Alaskan, it is king of the hill for lever gun, let me say... "Traditional Lever Gun" rifles, that fire big rimmed cartridge, traditional to lever guns. These traditional type lever guns come up short on pressure levels and just cannot match the power of the bolt gun, and its higher pressure limits.

One can increase the effectiveness of these type rifles/cartridge by bullet design, and by caliber. This is what we have done, and accomplished it very well. I did not find the 50 B&M Alaskan coming up short in any way, it was completely adequate for hippo, and buffalo and I would even take on elephant with it without an issue at all. With this being said, it still cannot attain the hitting ability of the 50 B&M in the bolt guns. The 50 B&M M70 is a hammer with even better bullets at higher velocity and same caliber, the lever gun cannot compete with that.

I love the M71s, better than the Marlins, they can handle a bit more pressure, are more heavy duty, but where they come up short for me is the versatility of a sight system. Because of top eject, one is limited to forward mount scope or red dot system. I can tell you today, I will never again use any red dot system, they just do not work for me, when in brush, and where in the hell can you go in the world that does not have brush, and if you do, then shots are too far anyway! On the M71, best of my knowledge today, I will be limited to a forward mount scout scope.. And then, I will come up short when things get closer than 15 yards because of field of view. With these things in mind, and I hate to say it, but I would in the future probably choose the Marlin platform because I can mount a proper scope right on top of it, and of course for this work I would use the Nikon 1x4....... I might loose a bit of velocity because of needing to stay in that 45000 PSI or below, but the sight system is such an improvement for me, that is what I would sacrifice willingly.

The 50 B&M Alaskan did a great job, I am very pleased with the performance of rifle, cartridge, and of course the bullets.

At no time did I ever feel undergunned with it. I did feel "Under Sighted" and inadequate in this area.