The 50 B&M is a true .500 caliber cartridge. It is designed for the Winchester M70 WSM control feed action. The parent cartridge is the Remington Ultra case cut and trimmed to 2.25 inches. Rifles have 18 inch barrels and weigh 6.5 lbs with the Winchester Ultimate Stock, and 7.5 lbs to 8 lbs with Accurate Innovations Wood Stocks, which are highly recommended. With an overall length of 38 inches this is a very handy and powerful package. When it comes to fast handling and heavy punch, the 50 B&M is in a class of it's own.

I have done more field work with this cartridge and rifle than all the rest combined, it had the most to prove as there are few or no real .500 caliber rifles on the market, and it was the first .500 caliber B&M. While the 50 B&M is capable of shooting all available commercial .500 caliber bullets, these bullets do not qualify as dangerous game bullets in most circumstances. Between JD, Brian, and myself, we were able to come up with several custom bullets that are suitable for all dangerous game. These bullets are available and have been tested extensively both in the lab and in the field.

Later working closely with Cutting Edge Bullets and North Fork Technologies, we refined and perfected the bullet selections for .500 caliber.

Basic Load Data for the 50 B&M

Custom Bullets for the .500s

Below is an Article from Rifle Firepower November 2012 by Jon Sundra.

A Bastogne Stock From Accurate Innovations

This is one of my stainless 50 B&Ms 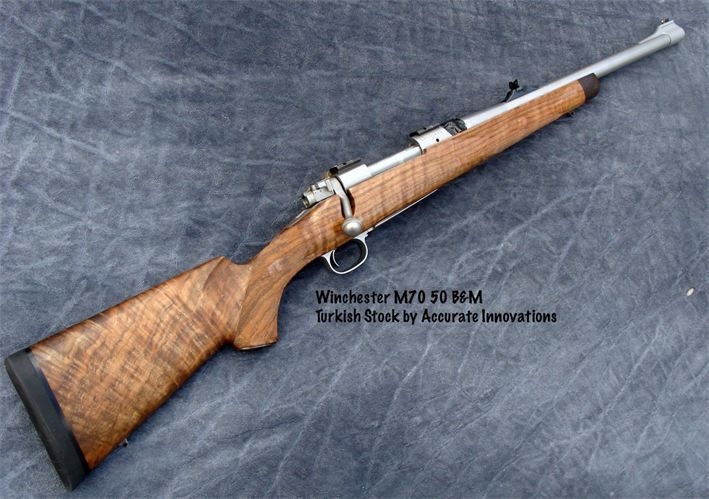 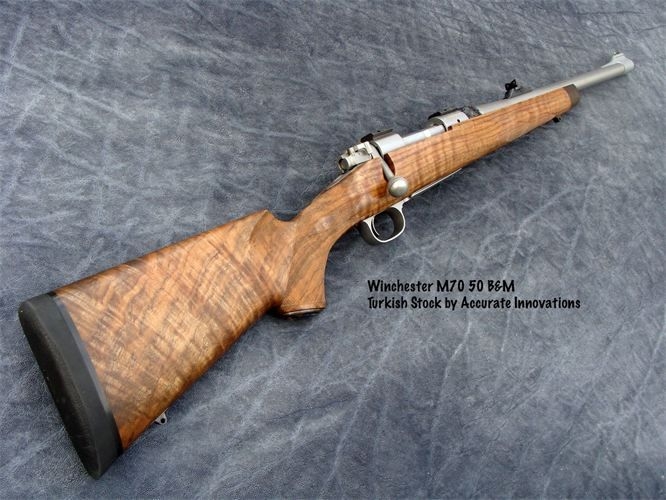 Recently we have changed the cavity on what was the 460 Raptor and it now weighs 450 grs. We made the cavity wider for LVSP, or Low Velocity Shear Point. I have tested this bullet down to 1500 fps now and blades shear perfectly, I have not had time to test below that velocity yet. This is a big improvement over 1800-1900 LVSP. 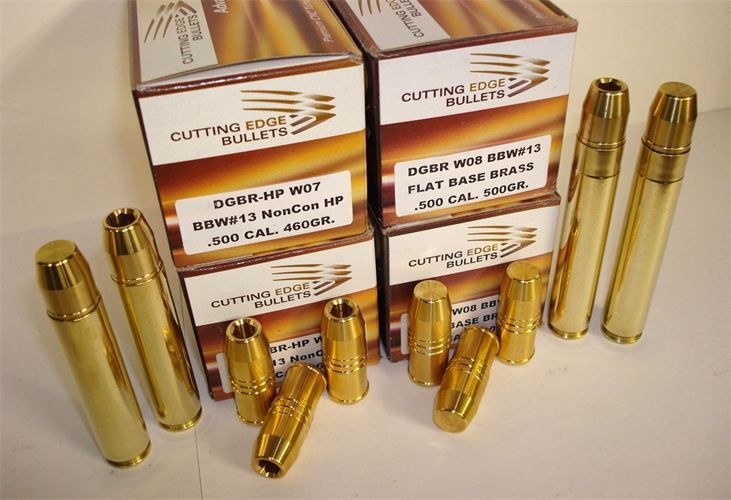 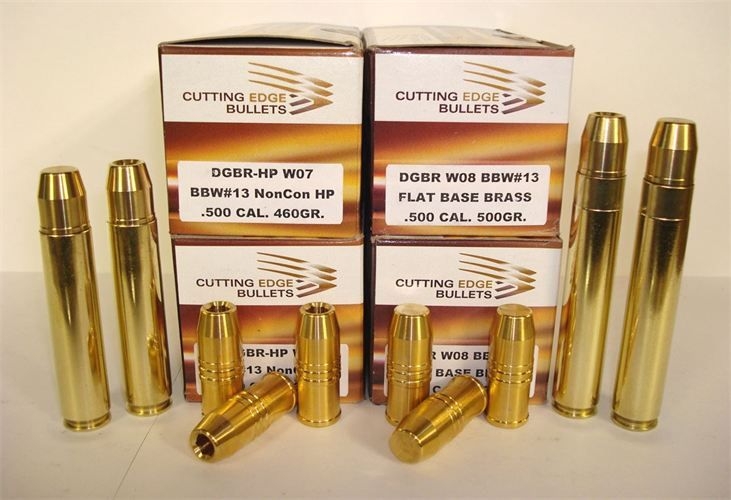 Click on the link below to find a very interested test done with this bullet dealing with pressures.

For 2012 North Fork has improved on the Nose Profile of the FPS, or Flat Point Solids, for all calibers, including .500. 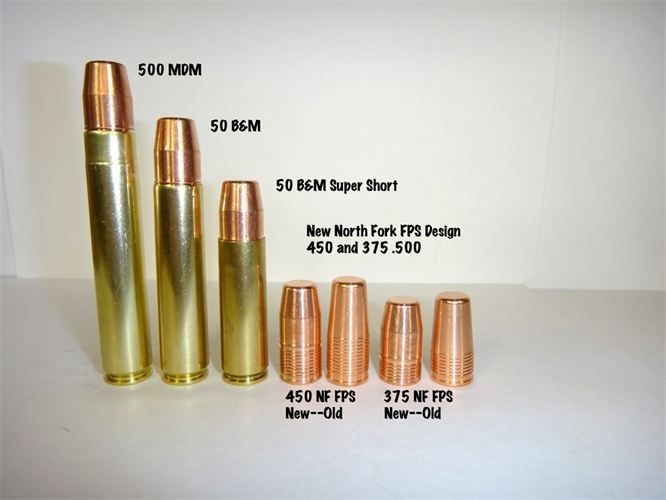 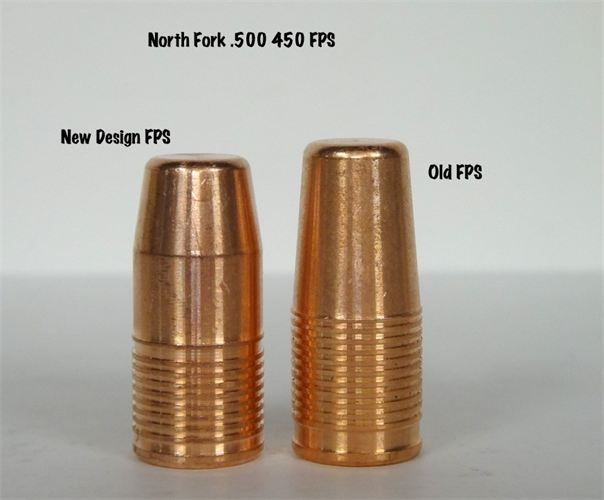 I think Daryl did an excellent job on the article above, and now he has taken it to the next step, going to the field with his 50 B&M. Daryl wanted to go to Africa with the 50 B&M and I hooked him up with long time Friend and PH, Andrew Schoeman. In fact, this is July 2011, and I just returned from an incredible Safari myself with Andrew, using the 500 MDM and 458 B&M with great success. Daryl has taken buffalo and hippo with the 50 B&M and I will let him tell you about it!

.50 B&M performed very well on both buff and hippo. In each case first shot was the 470grn HP with a 515 solid following to speed the ‘quietening’ process.

Buff presented standing face on and took first shot in the chest, which

broke the shoulder and passed through one lung. Put the bull face on the

ground bum up turning in a circle. Solid hit him in the right hind quarter

after he had spun 180 degrees, and solid passed through the length of the

body, through the other lung, exiting low on the neck. Game over. Found

Hippo was taken standing broadside with HP punching through the shoulder,passing through the top of the heart and smashing the outer ribcage on the opposite side. Solid followed up in the right hind quarter and is believed to have ended up in the stomach, somewhere amid the vast quantity of digesting grass. Hippo shot on land but made it into the water where he collapsed about 10m from the shore in knee deep water.

Recovered the HP projectile but not the petals. Range 47m

Here is an Article Daryl did on this hunt. 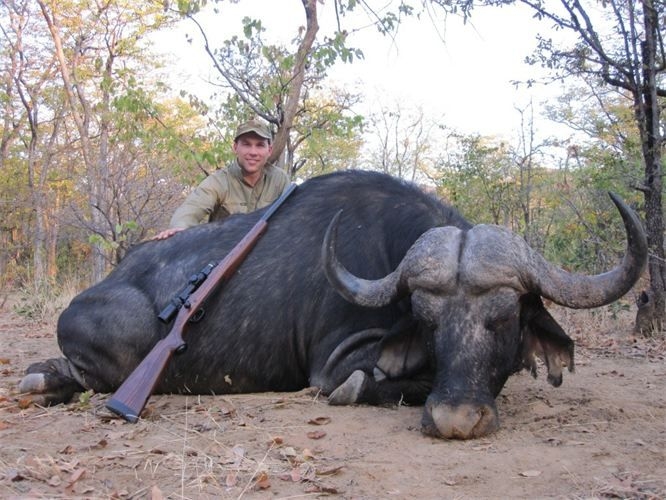 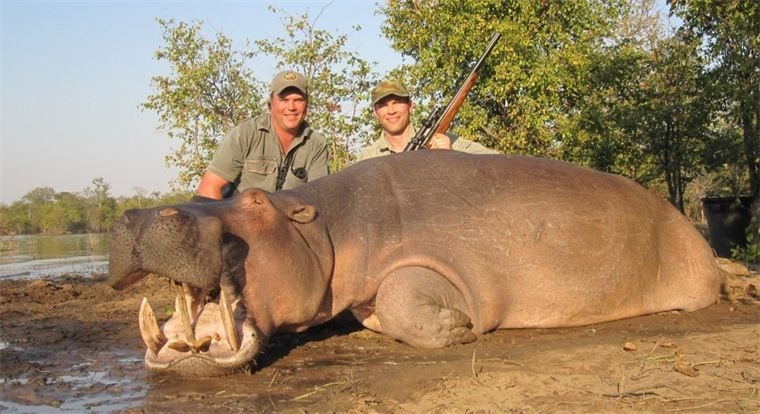 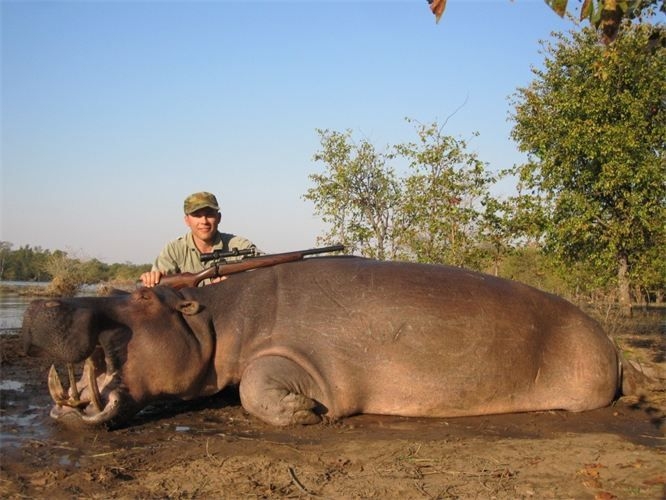 50 B&M Goes to Zimbabwe with my Buddy Lou!

Lou recently returned from Zimbabwe with his 50 B&M. Hunting with Andrew Schoeman. He used 500 Safari Solids and 450 Safari Raptors for his trip. He took buffalo, hippo and crocodile.

More Hunting With the 50 B&M 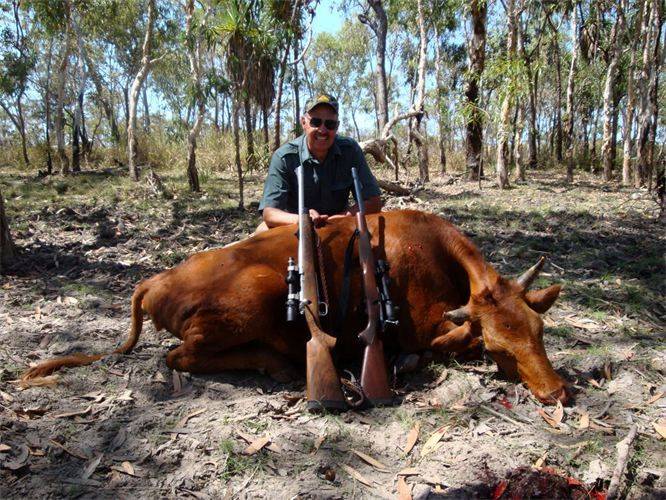 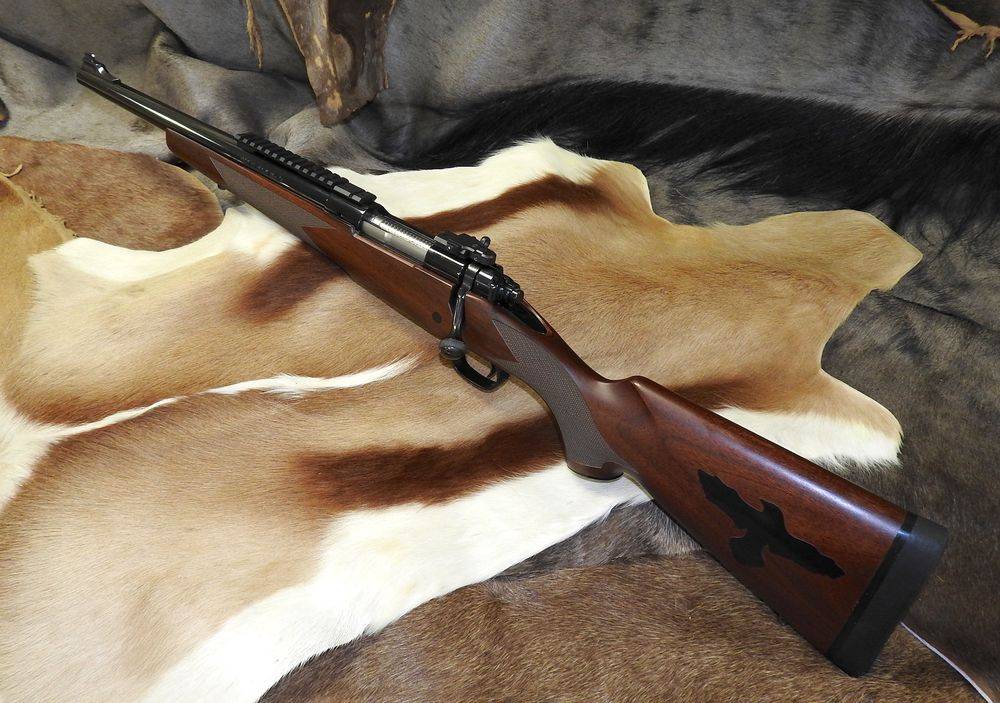 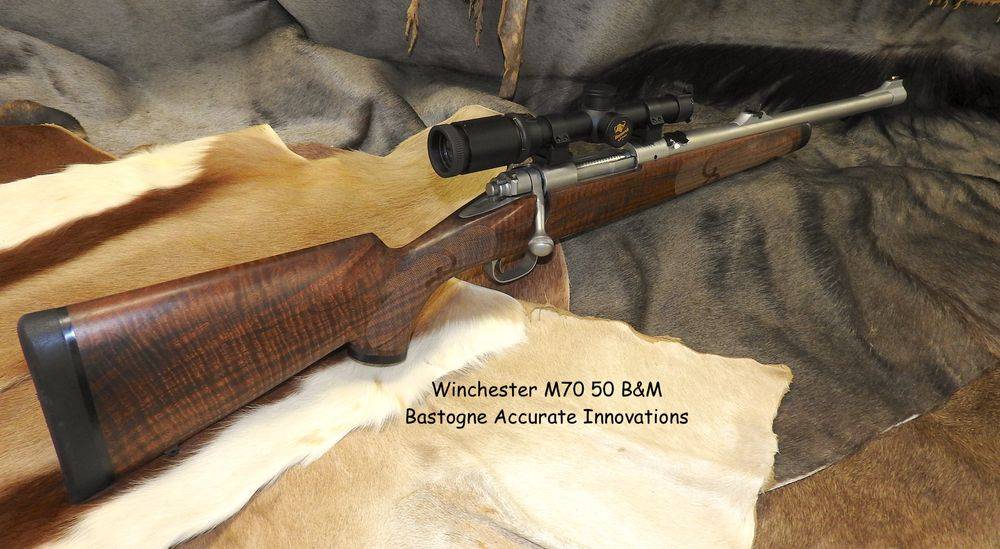 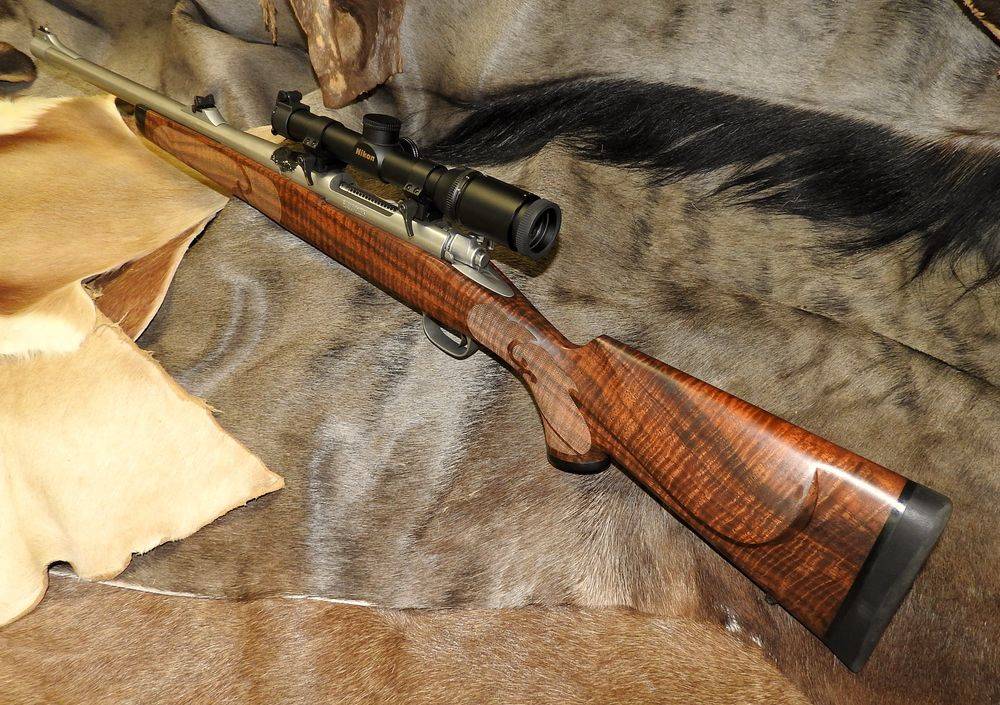 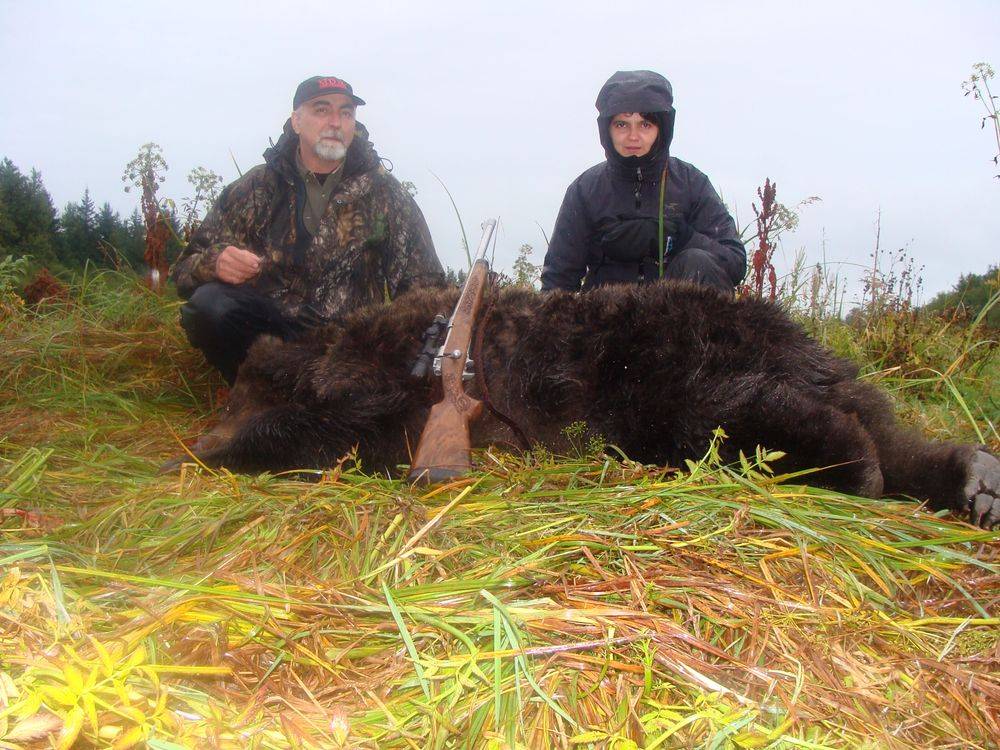 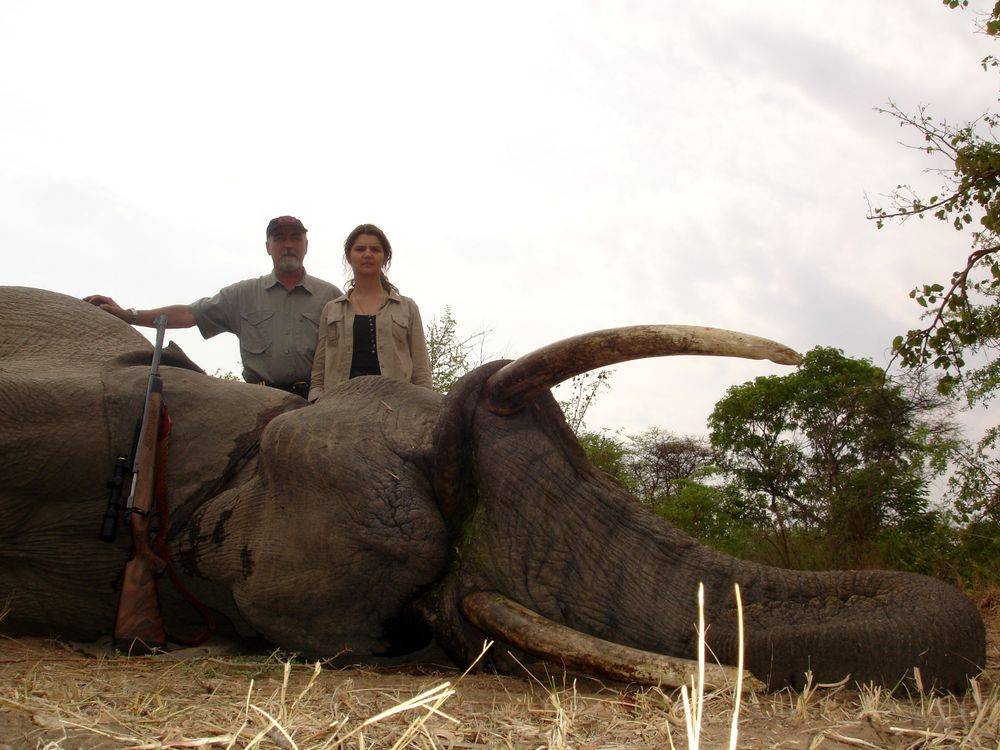 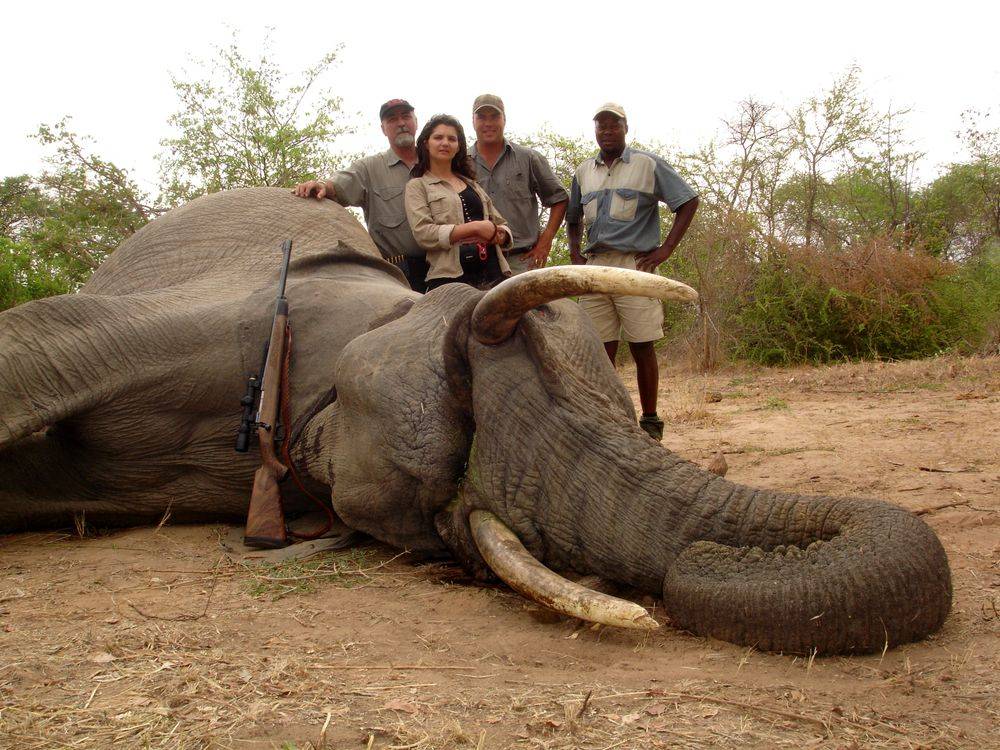 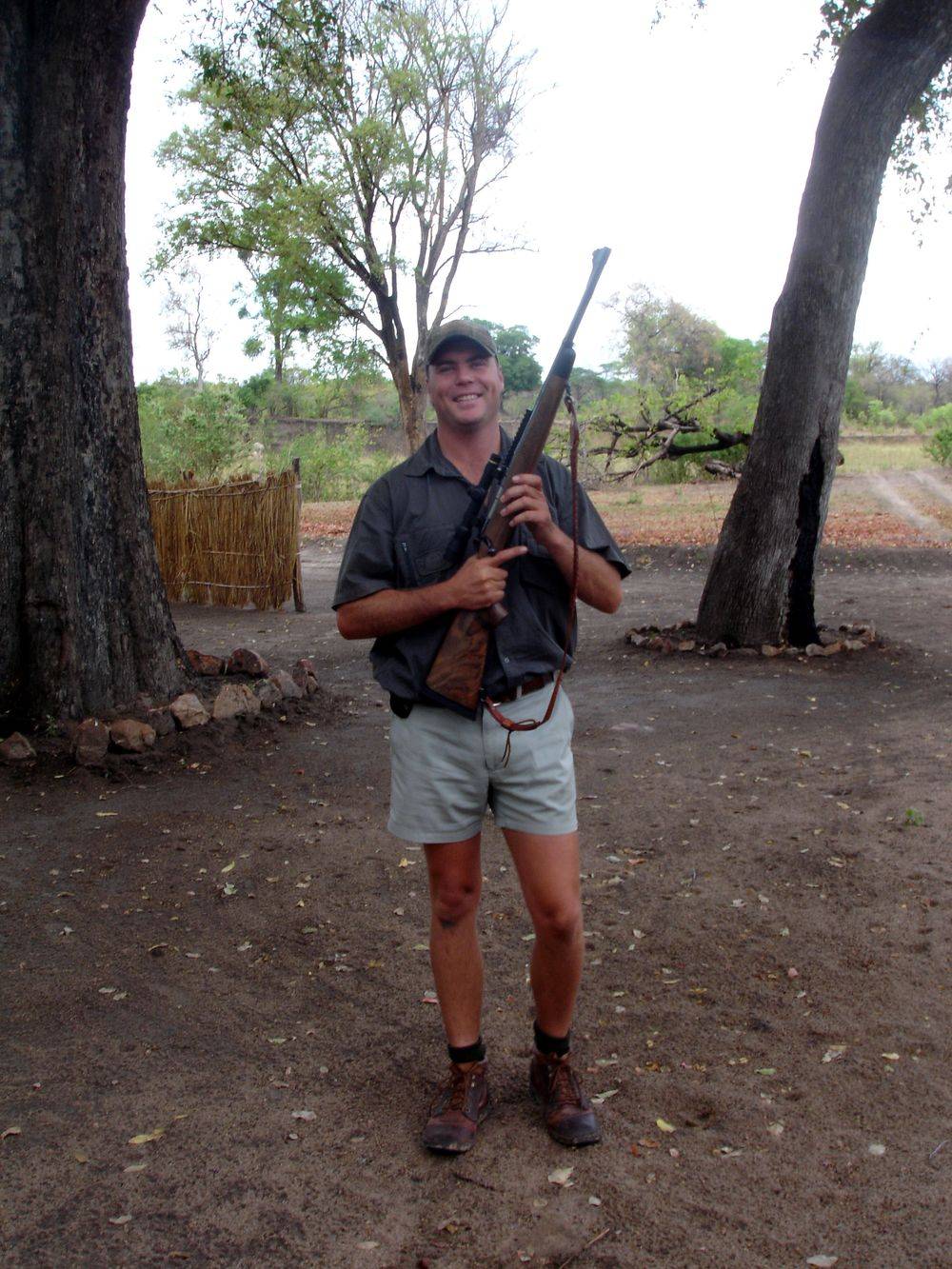 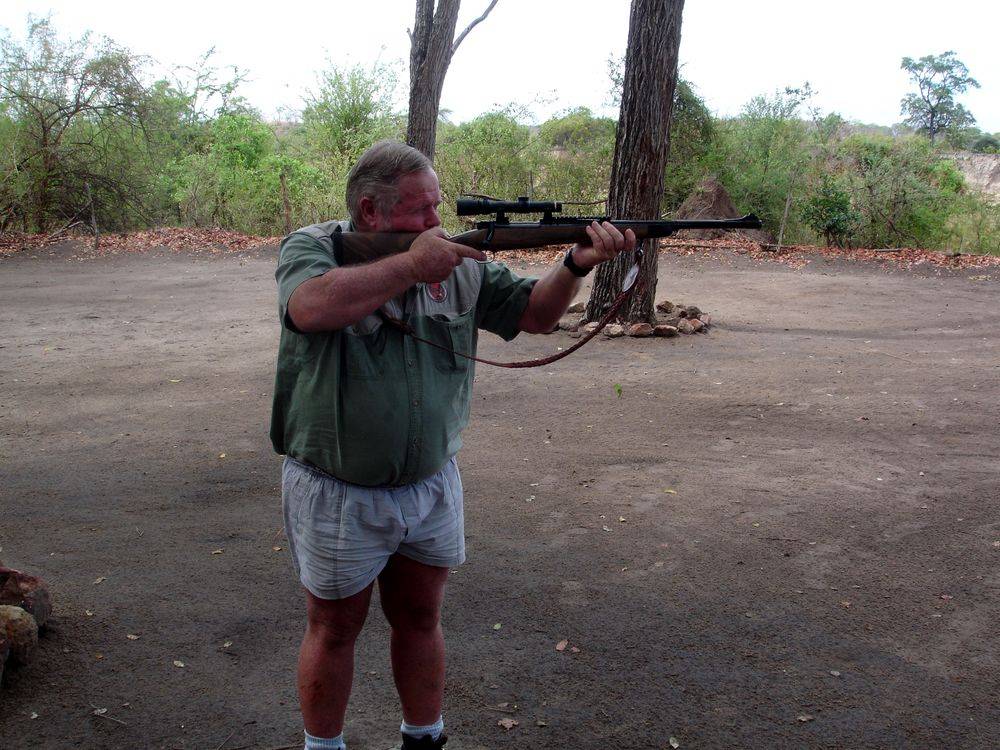 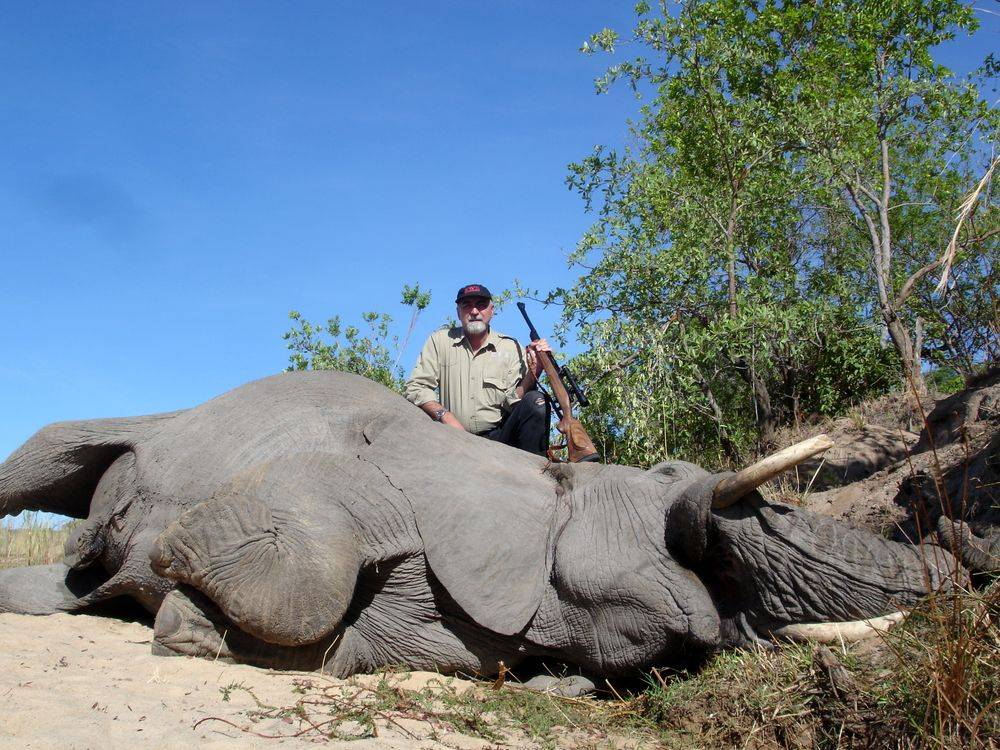 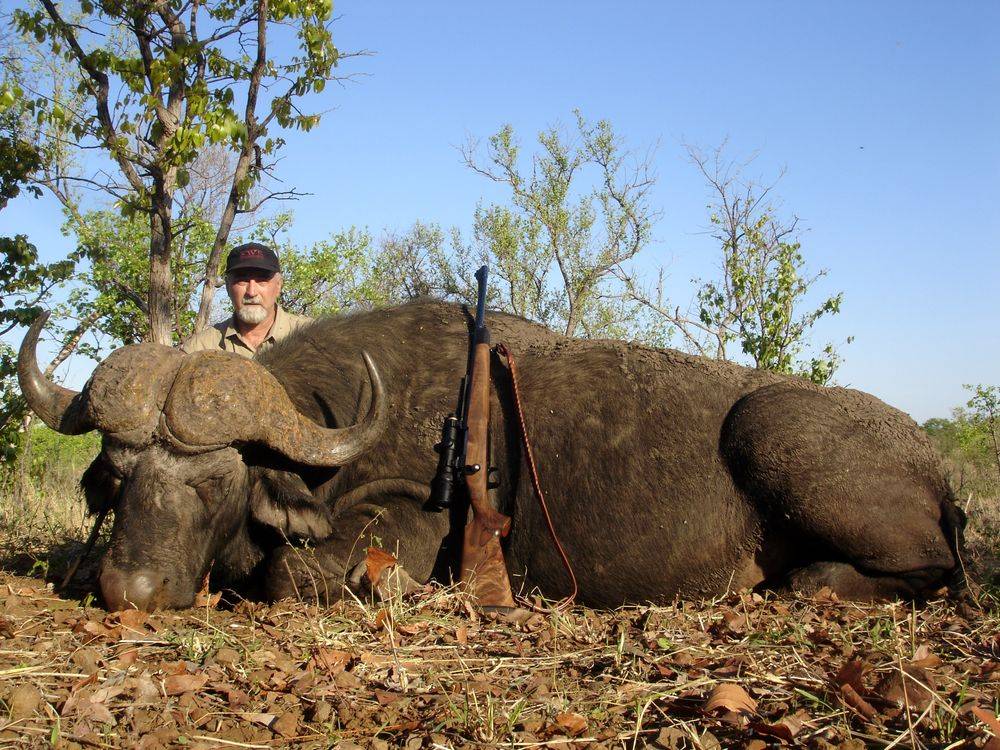 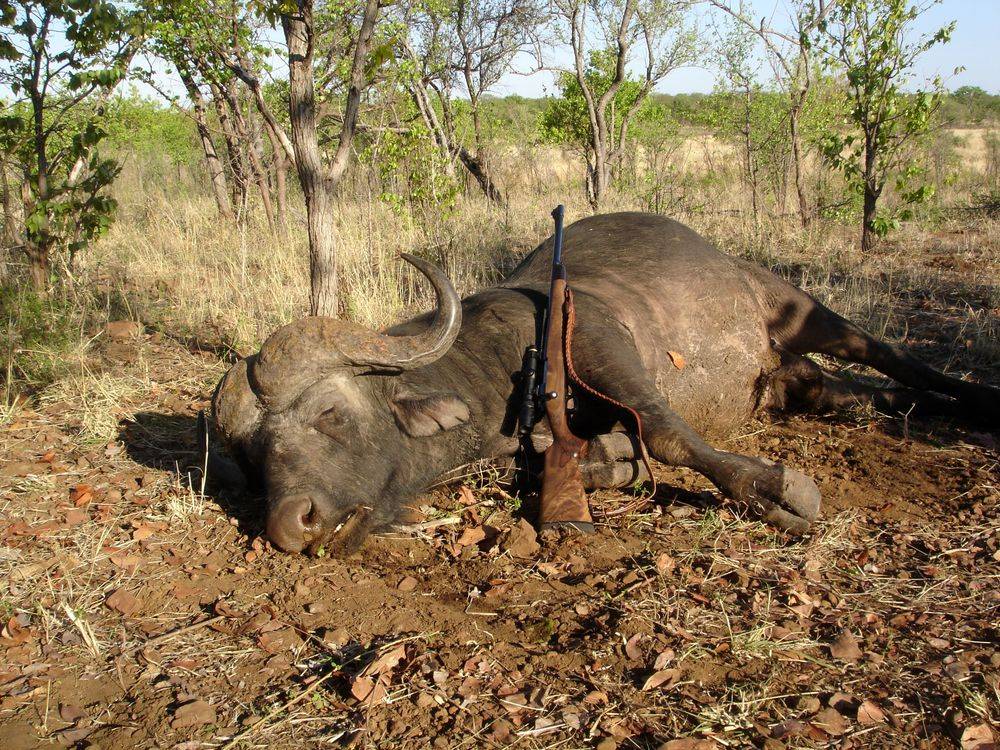