It was just natural for me to chose one of my 458 B&M rifles that I had been using for chamber pressures for this mission. This might have been a poor choice on my part, I never even thought about the 20 inch barrel and some of the issues I might have with a 7 lb 458 for this mission. Not recoil related, but Electrical and Recoil noise induced at the shorter distance between chamber and the location of the forward strain gage.

It became an issue with standard full power loads. For instance shooting a 450 gr bullet at 2250 fps as opposed to a slower bullet, a 500 at 2100 fps I would induce some wild readings at the end caused by recoil snatching at the wires hooked to the gage. Out of 5 rounds I might get only 1 smooth real barrel strain, the others getting bumps and noise at the end of the curve, higher than the peak at strain! So this was not going to work! What Sam and I did with the 470 worked very well, but it was almost always a 500 gr bullet in the 470 and all with the same load, and all close in velocity. This in combination with the longer barrel gave us some really good data.

With this in mind I felt like I had to get the bullets down in velocity, so I tried to do this at 2100 fps. Which will be the first set of numbers at the top of the chart. This started to work and come into play, but still not quite there. Out of 5 rounds now I was getting 2 and sometimes 3 reliable readings that showed a nice flat peak and tapering off with no jumps and bumps at the end. But I was still getting some wild cards thrown in. Not being quite satisfied with this, I spoke with Sam about it and we come to the conclusion that getting the velocities down to 1800 fps or less might start to bring things together.

I went to work and found a load that would get me close to what Sam and I had talked about, 56/H-322 across the board. This fell in line very good with velocities on everything running from 1800-1900 fps. This nearly took out all the noise and bumps at the end of the curves, gave me some smooth readings that seemed to fall in line and be more consistent across the board.

NOW PAY ATTENTION IN PARTICULAR TO THIS STATEMENT

You cannot compare these actual "Barrel Strain" numbers to the 470 NE or 500 NE! They are different barrels, not the same thickness, the 458 is even a stainless barrel that might have some bearing, so as far as actual barrel strain numbers there is NO correlation between 470 tests and these 458 tests. What you can see is a comparison of how the bullets fall in line from low to high. At least in some cases and in general.

I suppose that one would still consider the Woodleigh Soft Round Nose still a "BenchMark" bullet for comparison with others. The North Forks and CEBs are still within that range. Some higher, some lower.

Now I received surprise with some of the "Barnes Banded" coming in so Low? I decided to measure bullet diameters, and found out why they came in low! They are way undersized in my opinion, at .456. These were from a batch of the very first Barnes Banded that came on the market several years ago in the Blue Boxes. I can only suppose Barnes was frightened of "barrel Strain" and thus undersized these. I know on later versions I have measured them at only being undersized by .001, and that is fine on a mono and most are undersized by that much. Now, one can continue to "UnderSize" a bullet until you get to "ZERO" barrel strain, that is no big secret, but one also begins to suffer instability at some point?

For the most part I have completed the 458 Barrel Strain Study. There is some continuing work with 3 band bullets in different configurations. However in the most recent data the 3 Band did not significantly reduce barrel strain or pressures, over the already established 4 band versions of the CEB BBW#13s. What is apparent in the latest data that ALL of he Cutting Edge designs and the North Fork designs are big winners in barrel strain. Compared pressures were higher in many of the Cutting Edge Bullets over some of the others, however velocity also ran higher with the same load, in some cases as much as 100 fps faster. Reverse thought on this matter means that you can get by with less of a charge, equal the pressure of some other bullets and maintain velocity or exceed velocity, which is another win situation with the Cutting Edge Bullet and band design. 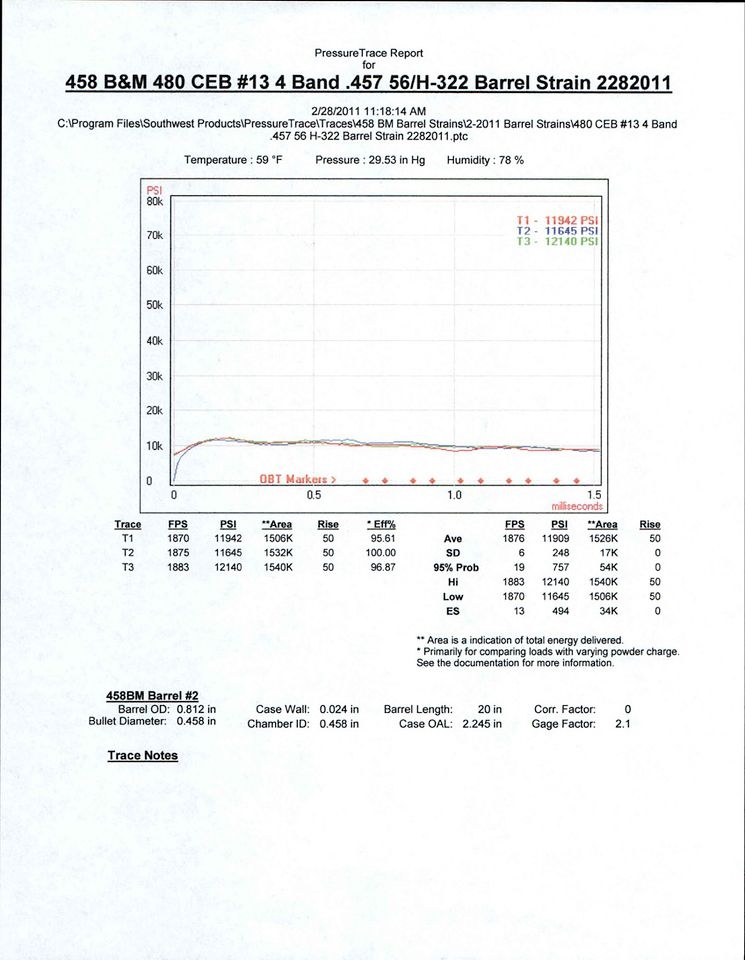 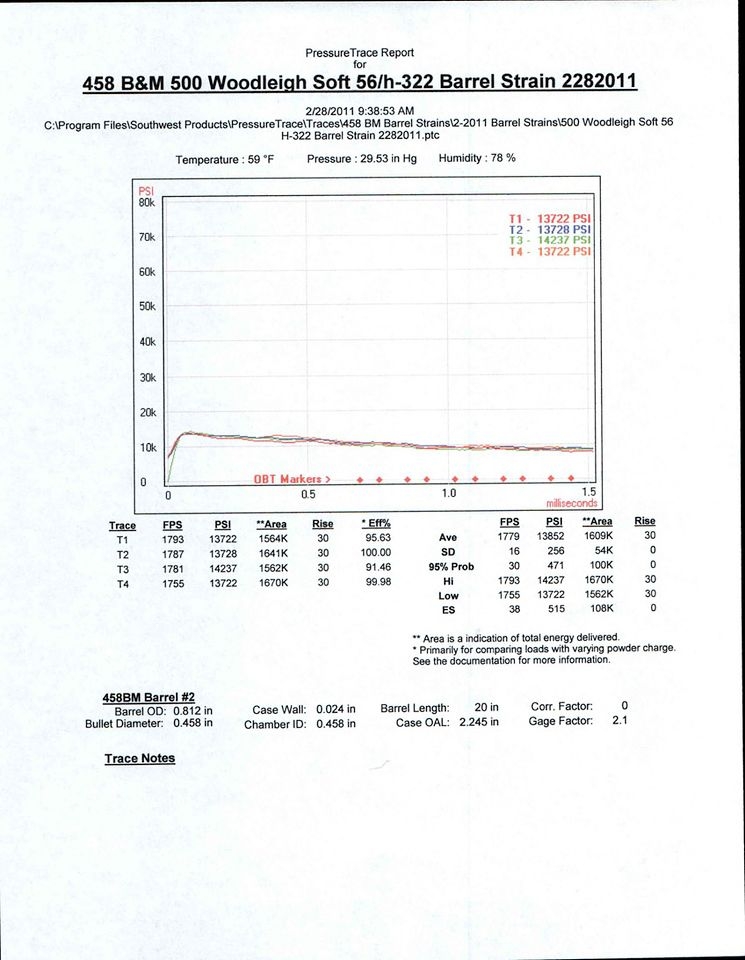 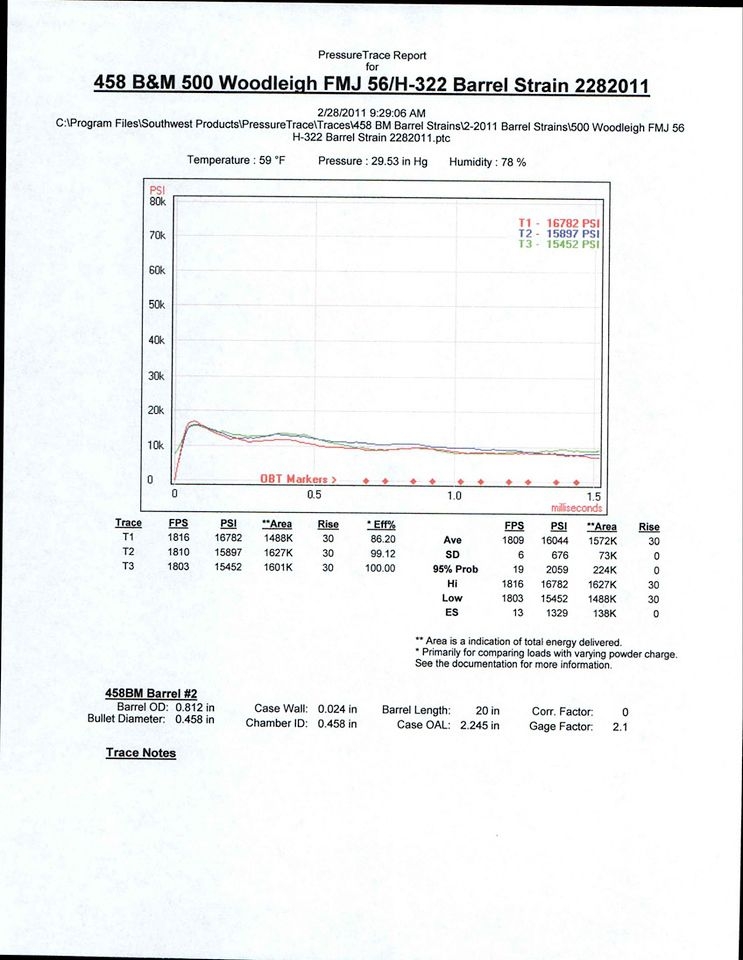 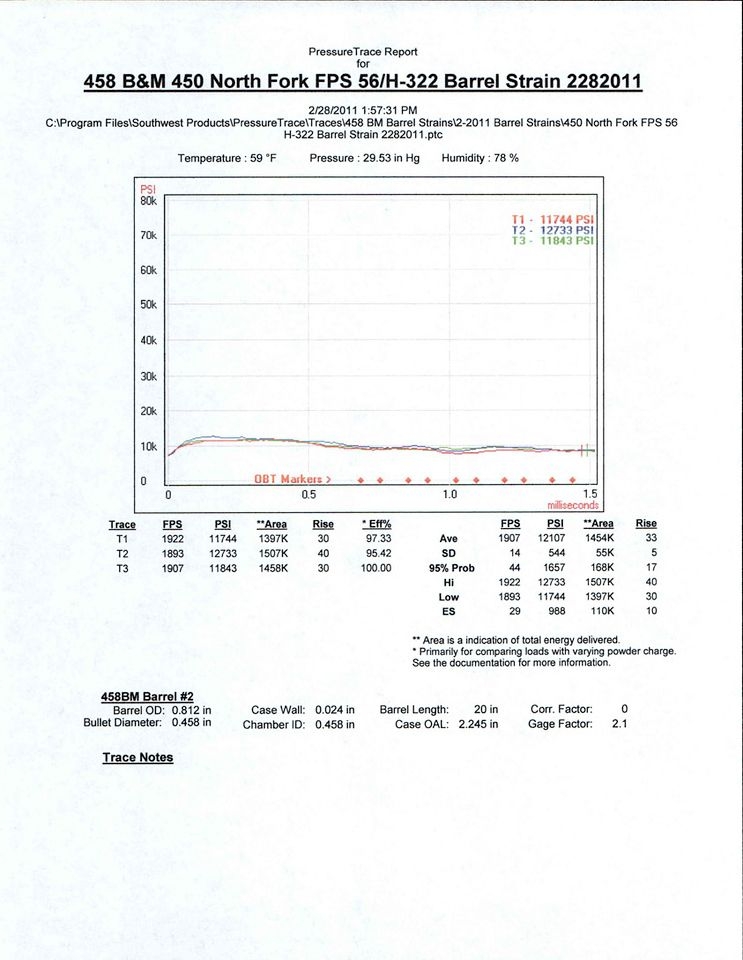 Here is the latest data with many comparisons of different 458 caliber bullets. Again using the 500 gr Woodleigh Soft Point as a Benchmark bullet.